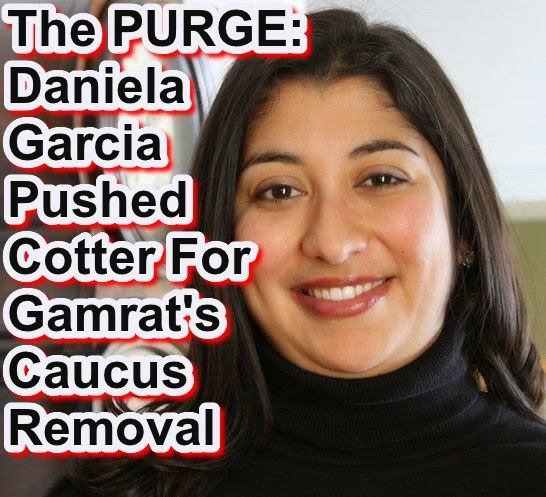 State Representative Daniela Garcia eyed me like a hawk as I entered the Cristman Building minutes before the meeting that would result in State Rep. Cindy Gamrat being expelled from the Republican caucus.

"You can't be here!" she immediately snapped at me as I approached. "This is a private House GOP Caucus Budget Meeting!!"

I replied, "Oh, woah, easy haha, this isn't the House Office Building? I have a couple stops to make." (I assumed it was because I saw all the Reps pile in there as I was headed to the HOB)

After some back and fourth with Garcia, I walked away, pretending to go further into the building, but then quickly turned around. Garcia had been watching me and was ready to chase after me had I really continued on!

When I got to the House Office Building, I asked a guard, "what is that place next door?"

"The lobbyist building," he said. "They meet there all the time."

The next day, State Rep. Cindy Gamrat was thrown out of the caucus. It wasn't over a Facebook post, Cotter has admitted that. It wasn't over "multiple incidents" of confidentiality breaches-no one can point to a single one from Gamrat...It was a behind the scenes power play from the likes of Al Pscholka and Daniela Garcia. Period.

I received a phone call from MIRS and a couple of other news outlets after Gamrat's ouster, saying that they had received information from "top sources" that "Cindy Gamrat was booted out of the caucus for inviting you into a private House GOP caucus meeting."


I couldn't believe I was hearing this. Such B.S. trash came from only ONE place, State Rep. Daniela Garcia. Garcia is third in command of House Leadership, and some factions want her to be speaker one day.  Powerful factions: think the likes of DeVos. She too, wants to be Speaker.

She is the ONLY  person who would have known enough to take a small sliver of truth and rig it all to hell, then feed it to media-no one else would know enough about the situation to provide media outlets with what they received! No one. Garcia or an agent she asked contacted multiple media outlets to tell an absolute lie. Ans she is spreading it all over Lansing too, adding other baseless accusations as well.

After our interaction, I figured out Garcia was indeed the key instigator who riled up some members of the caucus and pushed Pscholka and Cotter to act and boot Gamrat. And remember, Garcia, though a freshman, is Asst. Floor Leader-she's on the path to lead the House.

Garcia dislikes me after coverage of her 90th District House race, among many other things, and hates the likes of Gamrat for ruining the fantasy land narrative she wants to promulgate. Dissent does not sit well with Daniela. As Orwell said, "Truth is treason in an empire of lies." Daniela wants to head the Empire, she's Darth Vader in waiting while Gamrat is Luke Skywalker, fighting like hell with everything she has to blow up the "Death Star" that is Lansing.

Garcia's devious, deceptive whisper campaign, trying to tie Gamrat with WMP, is an absolute, bogus LIE. I can confirm for a 100% fact Daniela's "theory" is making its way around the Capitol, along with other false allegations that Gamrat is giving me information about caucus meetings. It's a cooked-up BS power play-she should be ashamed of herself.

Before Monday, when I stopped by her open office hours, I had never spoken more than a few words with Cindy Gamrat, let alone hung out with her at secret House GOP caucus meetings or organized with her in any way!

It's interesting to note that Garcia refuses to hold a town hall after over 6 months since being elected, and her first bill was literally bought and paid for by a donor. (More on that next week.)

It's time she stop lying about Cindy, put the fundraiser lists down, quit worrying about being Speaker, and start serving the people of the 90th State House District to the best of her ability.

Garcia is an immensely smart, talented Rep. who, though I disagree with her on many issues, at least she was up front about them.

She is capable of doing better than the same old politics of the past that have plagued Lansing, that people are sick of... Will she? It's not looking good-just ask Cindy Gamrat.

Read more about the situation below:


Candidate for RNC expelled from caucus

Posted by NerdWatch at 4:15 AM